Especially in owner-managed companies, insolvency is still generally seen as a “bugaboo”. As a result, it should be avoided at all costs.1 But are insolvency and strategy actually in contradiction? According to COMPANY PARTNERS, a proactive management of the “enterprise-life-cycle” can resolve this contradiction. This thesis will be presented in the following.

The current number of insolvencies in Germany increased in 2021. Due to a lack of assets, especially the number of rejected insolvency applications increased from an average of 28.6% during the last 4 years to 33.1% in 2021 – an indicator that companies “have their backs stand against the wall “. The statistics do not indicate which role strategic management plays in this discourse. The simple consequence for these companies is liquidation.

From a factual point of view, the end of a company always requires its start. In essence, the end is just as certain as the beginning. Literature distinguishes between four phases, e.g. according to St.Gallen Business School 2: 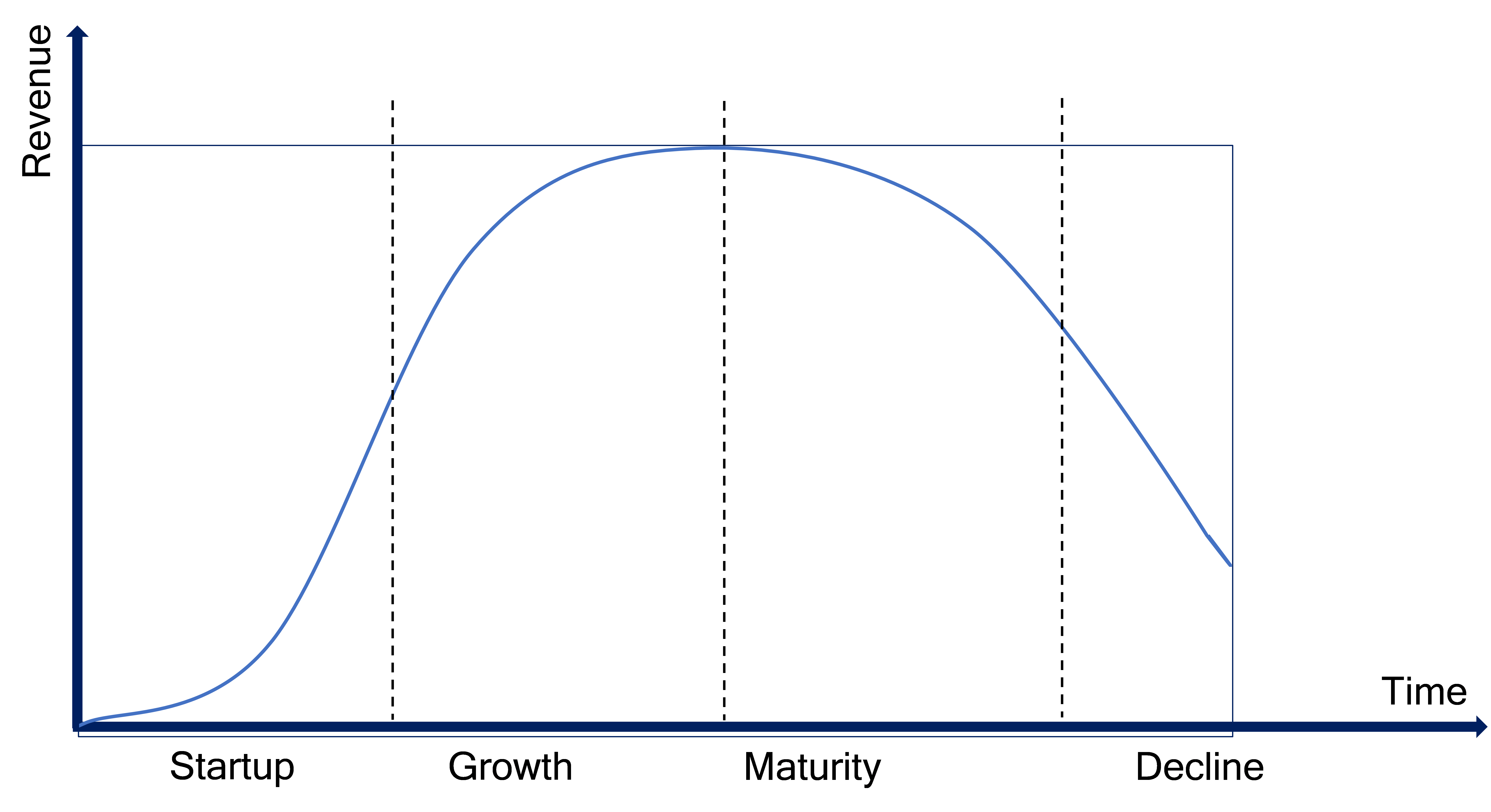 In reality, the lifespan of the company from startup to termination depends very much on the ability to proactively adapt to changes in the environment (market, competition, regulation).

Since a company usually defines itself through its products and / or services and their added value for the customer, graphics for the “enterprise life cycle” are based heavily on those that are used to show the “product life cycle”.

The “product-life-cycle” management has found its permanent place in the theory of company management or brand management.

In its well-known “BCG Portfolio Matrix”3, named after the company, Boston Consulting creates a close connection between the product life cycle and the enterprise life cycle:

In the case of a one-product company, the enterprise-life-cycle and product-life-cycle would theoretically be congruent. The situation is similar for companies with other products, providing that the main product is dominant for the company’s success.

As a consequence, one may wonder why companies usually operate a consistent management of product-life-cycles, but not their own enterprise-life-cycle.

Google trend shows the discrepancy between product-life-cycle and enterprise-life-cycle from 2004 until today:

Even in times of the financial market-driven economic crisis beginning in September 2008, the relative insignificance of the enterprise-life-cycle management remained. The German Google trend search leads to the same results.

The graphic used by the St. Gallen Business School to represent the company-life-cycle does not need an open end in uncertainty.

According to Company Partners, a complete graphic of the enterprise-life-cycle should have the following options: 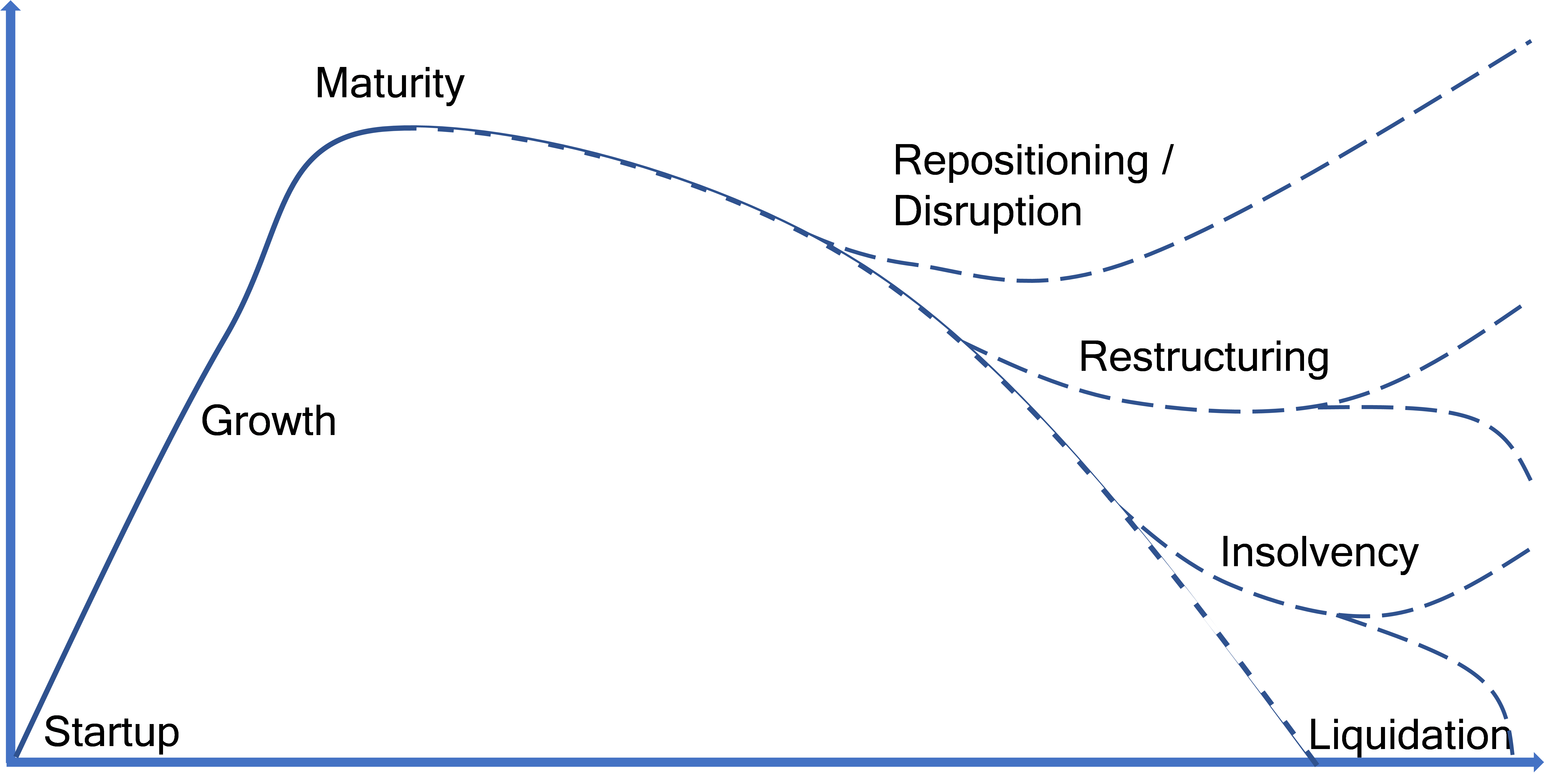 Successful repositioning in terms of acting like a start-up company can initiate a new phase of growth and promote further developments.

A glaring example of not managing the corporate-life-cycle is the well-known “Kodak case”. The company neglected to switch from negative film to digital photography or to promote its own innovations in good time.

The topic of “disruption” is currently on everyone’s lips. According to a Google trend analysis, the term beats the past search of the linguistically adapted “product-life-cycle”  in Germany and even worldwide.

Regardless of the fact that innovative processes and / or technologies can occur in all phases of the company life cycle, Company Partners recommends strategically dealing with at least 2 subsequent phases, depending on the current situation.

Strategic evaluations require knowledge and a systematic application. “The strategic enterprise management as a pre-control task with regard to the later realization of success consists of search, creation and maintenance of high and secure success potentials, which always includes the timely identification of innovation potentials.”4

The strategic evaluation is based on the analysis of the initial situation. Systematic analysis objects include the life cycle, the market position, the product portfolio and industry-specific opportunities / risks from innovation and disruption.

In his book “Strategische Unternehmensführung”4 (engl.: Strategic enterprise management), Aloys Gälweiler interpretes the innovation crisis as a risk trigger for a later liquidity crisis as early as the 1990s. 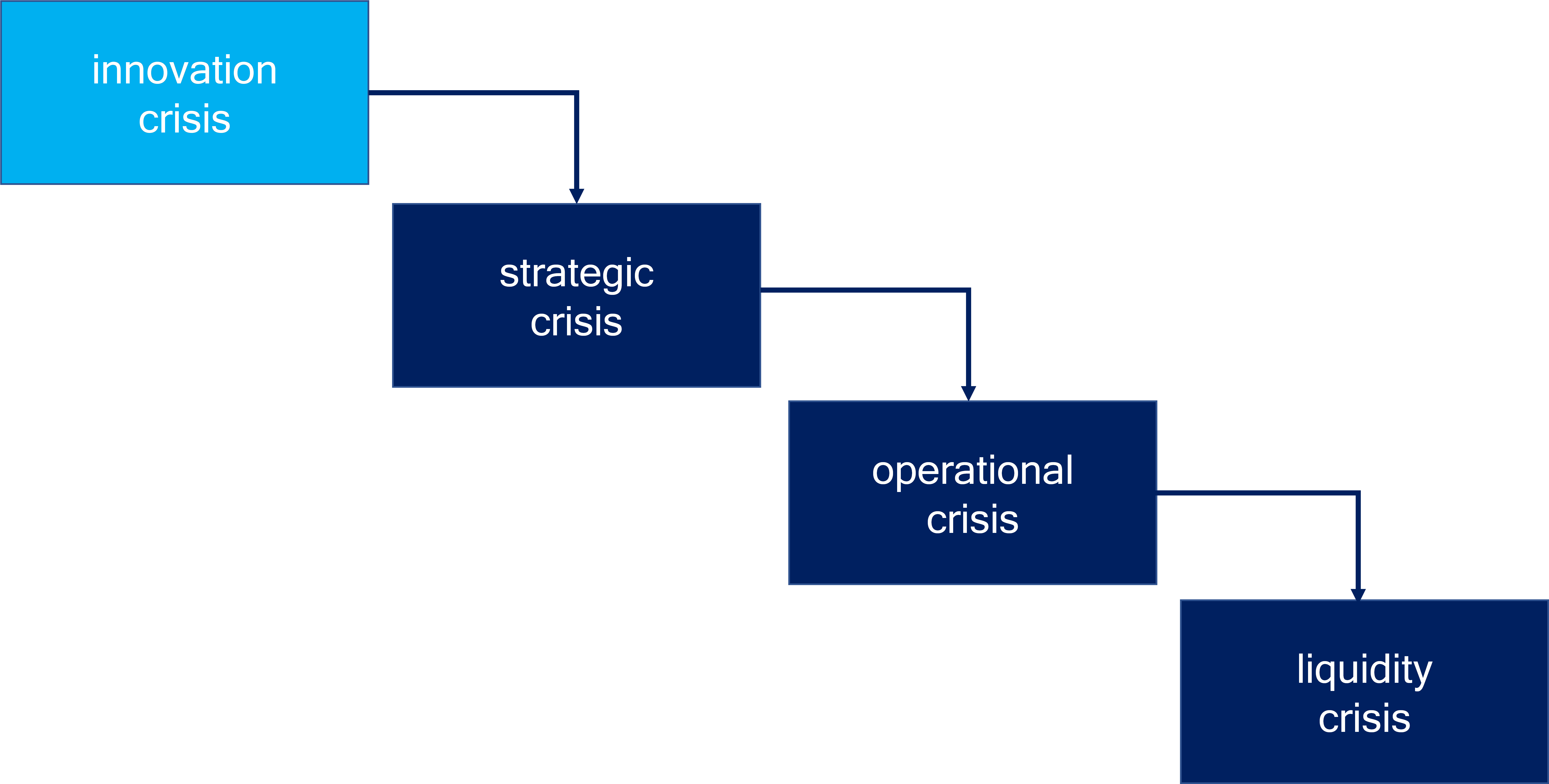 The analysis of the initial situation is followed by the development of strategic options. The knowledge of the options, e.g. of a restructuring, includes

When analysing the options, radical approaches should not be disregarded. The longer a company has been on the market, the more it has to ask itself questions such as:

„How would we start today in order to displace the established competitors in our market?“

Consequently, the assessment or selection of the strategic options takes place, considering their suitability (skills, change management skills, etc.), the acceptance of the stakeholders and feasibility (including in relation to technologies and feasibility with the existing or remaining employees).

The decisive factor for success is the consistent and rapid implementation of the strategic options that have been decided.

Insolvency is one of the basic options during a beginning degeneration. Further options are: pre-insolvency, out-of-court and judicial insolvenies:

This overview is explained in more detail below. Basically, the earlier a company reacts to a crisis, the more self-determined the crisis can be resolved.

The restructuring goal can be achieved by the company itself.

The restructuring goal can only be achieved together with other stakeholders.

This self-administration approach is eligible for insolvency payments; the employment agency must also be included as the later creditor in the context of drawing up the plan.

Compared to the pre-insolvency options of restructuring with or without StaRUG, insolvency offers some advantages. Here are two examples, regardless of whether a protective shield procedure, self-administration or regular insolvency is being carried out:

The second advantage in particular favours companies with a high rate of personnel costs such as call centres, contract manufacturers or temporary personnel service providers.

The disadvantages of insolvency are widely known, differ in the type of procedure and should be carefully assessed. Basically, an insolvency plan should be prepared beforehand.

The situation of every company should be reassessed by the stakeholders and the management at least annually. This includes determining the position of the company life cycle. One lesson from the covid-19-pandemic is that insolvency can occur faster than ever thought. The legislator significantly expanded the regulatory framework for redevelopment on January 1, 2021 with the StaRUG. Further solutions may follow. Dealing with bankruptcy is a natural option – the fear of it is not a good advisor.

Company Partners therefore recommends that companies deal with all strategic options up to liquidation within the framework of the company life cycle management at the latest in the beginning of the saturation phase. The higher the degrees of freedom and self-determined possible solutions!

Company Partners is a group of consultants, focused on the topics of strategy and restructuring in pre-insolvency phasis. Elsflether Werft AG with sailing vessel “Gorch-Fock” is one of its references in the context of self-administrating insolvency.

Matthias Richter, born in 1956, is restructuring companies since 22 years. Part of the success is the interim management of companies out of the crisis – 8 times as CRO Chief Restructuring Officer. The author began his career at IBM and focuses on innovation and sales as key success factors in the operational restructuring. His motto in life: “Life is what happens while you are busy making other plans.” – John Lennon.